Our celebrity pick this week is a much younger face whose style influence is pertinent to the Gossip Girl generation – Chace Crawford. He has been catapulted into stardom since his portrayal of a rich kid named Nate Archibald in the popular American teen drama series.

Aside from being a very recognizable good-looking male face thanks to Gossip Girl, Crawford hasn’t done any fireball acting work warranting him of a strong Hollywood mileage. The 28-year old actor has been acting since 2002 and starred in a couple of movies such as “What to Expect When You’re Expecting”, “Twelve” and “The Covenant”. He’s won a Teen Choice Award for his Gossip Girl acting as well as earned himself the title of “Summer’s Hottest Bachelor” from People magazine in 2009.

The good thing about the young actor, while the giant Hollywood breakthrough hasn’t happened yet, he has maintained a polished look worthy of grabbing the media and public’s attention. Let’s get to the details of how he does it. 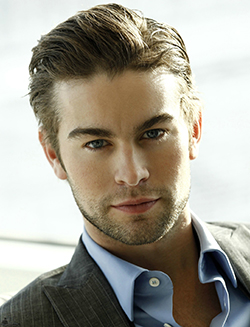 He may be young but Chace Crawford’s style surmounts all age groups. He knows how to command a sharp everyday look which is timeless yet fresh. Gossip Girl perhaps made a big contribution in his dressing because after the show ended, wearing suits everyday became almost natural to him. Most stars would rely on stylists, but Crawford developed the talent of choosing the perfect fit himself, mostly finding preference in Dolce and Gabbana suits. He wears tuxedos and tailored suits of black or classic colors, either with tie or bow tie. In a more relaxed atmosphere, he skips the neckwear altogether, opting for an open collar shirt under a suit, rendering his own fresh modern approach.

In terms of casual dressing, Crawford is a strong believer in ‘less is more’. He doesn’t go for the Nautica ad kind of look either, which his character Nate Archibald wears on the TV series. He keeps his look clean, observing basic and classic staples in his wardrobe. Don’t expect him to wear outrageous colors as it is rare to see him wear colors other than black, gray, white, navy or neutrals. Even his t-shirt designs are kept to a minimum, usually sans prints. Crawford pairs these plain tees with dark, slim jeans. From time to time, he would match his casuals with a good sleek jacket to level up his casual dressing.

For accessories, a classic watch, sunglasses or a baseball cap are exceptions to his minimalist approach. While in shoes, the young actor is starting to master a good taste in dress shoes to suit his sleek looks.

Evidently, Crawford’s style is safe and sans frills. Like his acting, his manner of dressing is devoid of elements granting him colossal impact in the style department. However, it is also important to note that this same grounded style gives him leverage in appealing to a wide range of men and women; an image a large majority can relate to.

It makes it all the more interesting that while Chace Crawford does not have a gargantuan career yet, he already has a style that is timeless and iconic, ever ready for the moment he strikes it as a renown star.

The young actor at the Golden Globe Awards showing his perfect example of classic style injected with a youthful and modern touch. He pairs a black tailored suit with a skinny tie and polished dress shoes. To recreate this Crawford look, we recommend a Boss Hugo Boss trim fit tuxedo on ASOS shirt. For the accessories, we suggest a Paul Smith Oxford shoes, tie and pocket square from River Island to complete this seamless look. 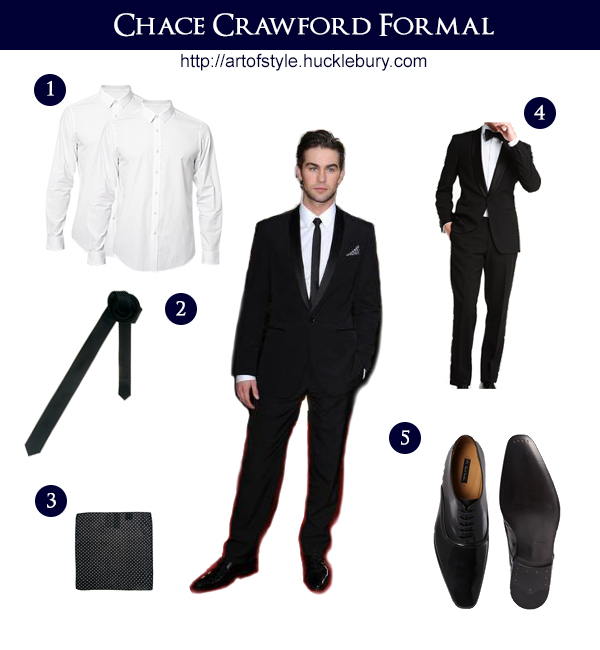 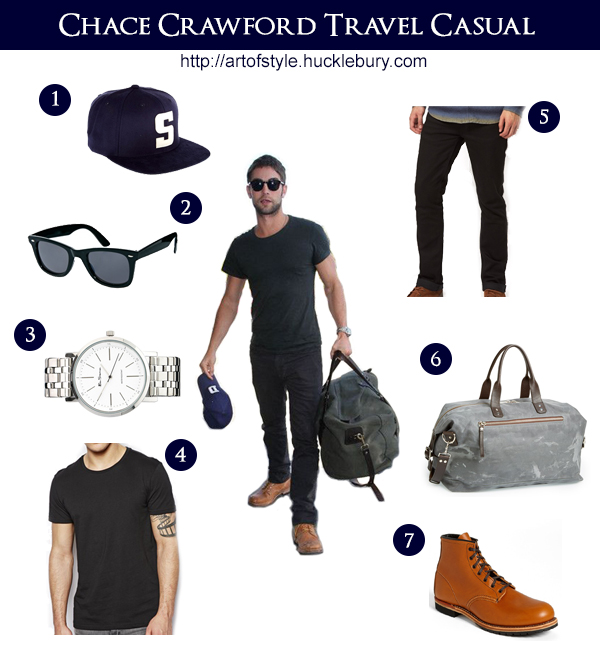 Crawford keeps it simple yet stylish while shopping in West Hollywood. He wears his casuals with a one-pocket basic t-shirt, slim-fit jeans together with a pair of rugged leather shoes and a classic timepiece. To score this simple look, we recommend an ASOS one-pocket t-shirt, A.P.C jeans, River Island boat boots and an ASOS watch. 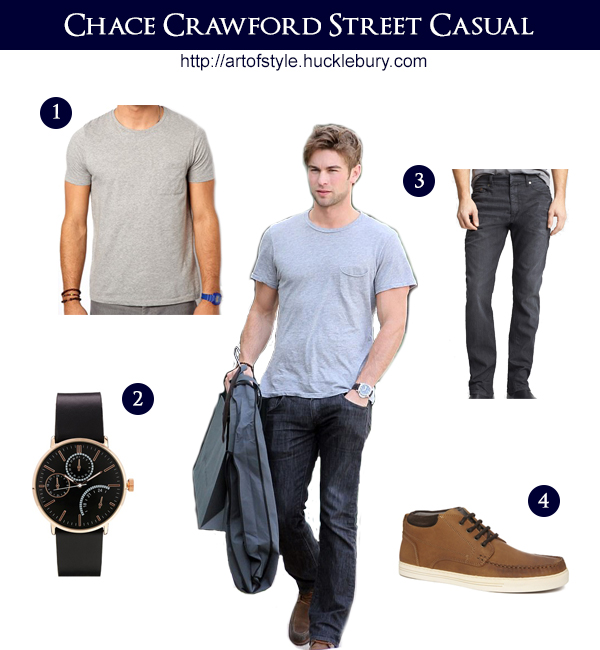