Trending
You are at:Home»Fashion»Attention To Detail»Yokes On Dress Shirts – How Do They Matter?

We all know that fashion is constantly evolving, and mens fashion is no exception. When it comes to choosing a dress shirt, what was stylish just a few months ago may be outdated today. However, one thing that does not change are the basic principles of construction. A well-constructed garment is timeless, and in today’s post, we want to familiarize you with one of the elements of a man’s dress shirt – the yoke.

What is a Yoke?

The yoke of a dress shirt is the area under the collar, that drapes over the shoulder and holds the shirt’s backing over the body. It is essentially the piece of the garment that behaves as a hanger, and creates the crisp lines of the shirt’s backside.

If a yoke is not well-made, it can cause gathering of the fabric in the center of the back, which makes the back look pinched, and often cheapens the entire look of the dress shirt. They are usually sewn with a double layer, so the shape has correct fabric weight to drape over the body, and does not allow any wrinkling.

Are All Yokes Created Equal? 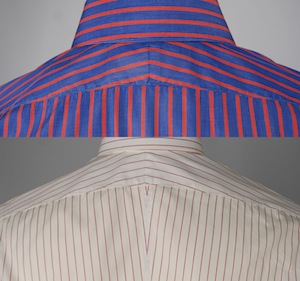 No, they are designed with the human shoulder and back in mind. Each person has their own shape, and lifestyle that can change the way their shoulders move. When a tailor is creating the shirt, they consider several elements:

The Different Types of Yokes

This is the more common of the two types. It can be considered to be a little more casual than the split yoke since it is the standard style, and is sewn from the same fabric as the rest of the shirt. Generally, a single yoke is found on garments of a single solid color.

This is the more formal of the two, mainly because it has to be tailored for the person wearing it. It is made out of four different cuts of fabric, with a seam down the middle. The dress shirt will feel easier to move in, since each slope (the x-axis, y-axis, and z-axis mentioned above) can be considered in the design. However, patterned shirts, like check patterns or stripe patterns, need to be carefully tailored so that the dress shirt looks fabulous.

So the next time you contemplate purchasing a dress shirt, you would know about the nuances of its construction and make a more informed decision.